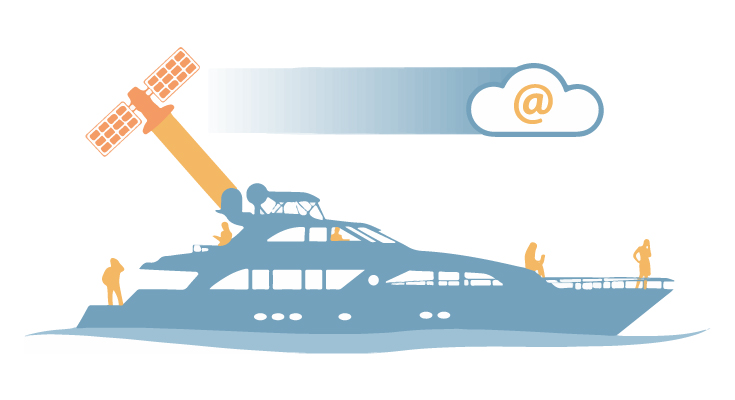 Today, technology has evolved so much that you can get internet connectivity even in the most remote corners of the world. Over the last decade, we’ve become incredibly reliant on internet connectivity. And, there’s just no way to unplug and get away from the internet. It’s nice to know that you can stay connected to your loved ones throughout the remote corners of the world. While the mobile internet has its limitation, it’s possible to get satellite internet almost anywhere you are. Let’s say you’re planning to take a long relaxing boat trip with your family, how can you stay connected to the world on the land? Satellite internet for boats can help you and your family stay connected to the internet.

Some of the top names for satellite internet for boats are:

Recommended  Difference Between Bandwidth And Latency: All You Need To Know

As for the hardware, it actually differs from what you’d get if you’d sign up with an ordinary satellite internet provider (HughesNet & Viasat). Most maritime satellites are in the shape of a dome which is a good idea for a boat where you want your dish to be fixed in a single place. On a dish, you can’t point the dish to a particular location, so these dome-based satellite devices make up for the fact and this different equipment costs a huge amount.

Cost of Satellite Internet for Boats

Gaining access to the internet on a boat can be expensive. And it makes sense that you’re paying for luxury. The process isn’t like signing up to any ordinary residential internet provider. The equipment costs and obtaining the service are extremely expensive. You also have to figure out the service costs, which are more expensive than any other provider you’ll find on land.

Recommended  How to Stay Safe On The Internet? The Complete Guide

Equipment costs of satellite internet for boats can go up to thousands of dollars, and if not ten of thousands of dollars. The low end of equipment cost will be as low as $1,400, and if you want something more fancy and high-end for huge boats, the cost can go up to $50,00 (just for hardware). And, there’s a cost of satellite internet service installation on your boat, as it’s a difficult and technical process.

Now comes the service cost for the internet service itself. If you’ve been living in a city and are habitual of using unlimited internet service for just some hundred dollars, then you won’t like maritime satellite internet plans. While there are low-cost plans for satellite internet on boats, they are extremely rare. If you want unlimited internet access on your boat same as your home, then the plan range could be $1,000 – $9,000.

Maritime satellite internet plans are more expensive compared to other providers because the data transmission costs are huge. Plans with higher data caps can easily reach $1,000 and even those plans will only offer a couple of gigabytes. To get truly unfettered access, you’re more than likely to pay almost $9,000. If you’re planning to spend a long time on the water, you’ll easily go through some gigabytes of data.

Speed of Satellite Internet for Boats

One of the biggest challenges with satellite internet of all kinds is its slow speed. If you’ve ever used a DSL internet connection, the speeds you get with Maritime satellite internet are also similar. On low-end plans, you’ll get 128 KBPS, and on high-end plans, it offers 2 MBPS plans. While the speeds aren’t exactly slow, they’re also not incredibly fast either.

Recommended  Best Internet Options To Choose From While Working From Home

There’s not much data available on latency and other types of speeds that you’ll get from satellite internet. But one thing is for sure, you won’t be able to do any online gaming or any activities that require low ping and low latency level.