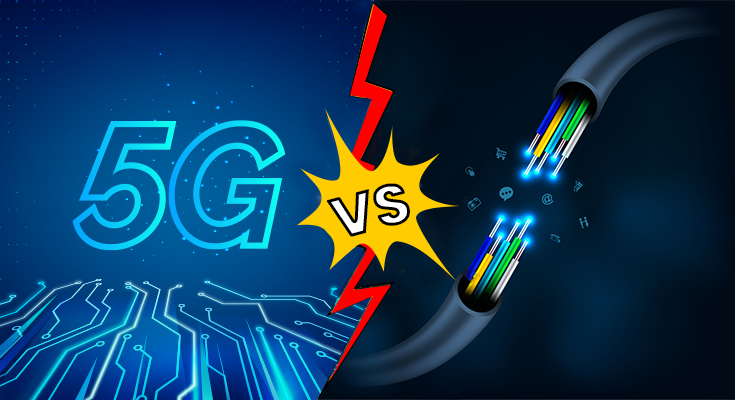 With the advancement in technology, users are demanding faster network connectivity to the Internet. In the early days, connection with the World Wide Web was established through traditional copper cables. It proved expensive, but the copper channels also lacked efficiency and caused data loss. Later, it was replaced by optical fibers, which are used to date in comparison to 5g internet faster than fiber.

On the other hand, 2G and 3G were the most dominant cellular network generations till 2013. But they had several drawbacks, due to which a 4G network replaced them. In 2019 however, the 5G network was introduced for cellular users, and both these generations are now defining communication networks in a parallel manner.

Many people quickly get confused, and the question is 5G Internet faster than fiber. Since there are several contradictions in the answer, we have created a brief explaining specific facts with which you can easily decide which network is faster to connect with the World Wide Web.

What is fiber communication, and how does it work?

Fiber communication happens via optical fiber cables that are further connected to an optical transmitter and receiver. The electric signals are first converted to infrared light signals and travel through optical fibers without suffering much loss or impositions of disturbances and noise signals. When the optical receiver receives it, the light pulses are transferred back to the electrical signal and decoded, for they should achieve the information.

While they have been in use for several years now, the concept of optical fiber communication is still new. As data is transferred in light pulses, the speed is very high, so optical fibers have now replaced traditional copper fibers in terms of Internet connections. Developments and upgrades are happening almost daily to ensure the communication speed can be improved without impacting the transfer quality, delays, latency, and security.

Benefits of fiber channels for Internet

Drawbacks of the fiber internet

Recommended  How to Change Your Spectrum Service Or Cancel It

What is 5G communication, and how does it work?

In 2019, the 5th generation of the wireless network was introduced to the masses, also known as 5G. It is said to be the fastest communication channel so far. Ensuring data can be transferred within seconds than what used to happen for 3G and 4G networks.

Several small cell stations are located in areas like roofs, lighthouses, long poles, etc. They ensure the transmitted waves are within a millimeter spectrum, with a frequency of 30 GHz to 300 GHz. Since the distance between the cell stations is small, the 5G network established doesn’t suffer from latency or physical obstruction.

Had it been for the long-distance communication networks of 4G. The service providers won’t have been able to implement the 5G spectrum. Recently, a new approach has been adopted where all three band frequencies, low, high, and medium, will be combined to establish the connection channels. This is because each frequency band limits the distance they can travel.

For example, low band frequencies can cover more considerable distances while high band frequencies are meant for smaller spaces. Therefore, the coverage will increase with the implementation of all three frequencies within the 5G network.

Recommended  Who Invented The Internet: Brief History of Internet Service

Now that you have got your answer for 5G Internet faster than fiber. The responsibility of choosing the best network will fall on your shoulders. While doing so, you must consider the differences in speed, latency, security, and cost setup. The feasible network in most factors should be the one for you.