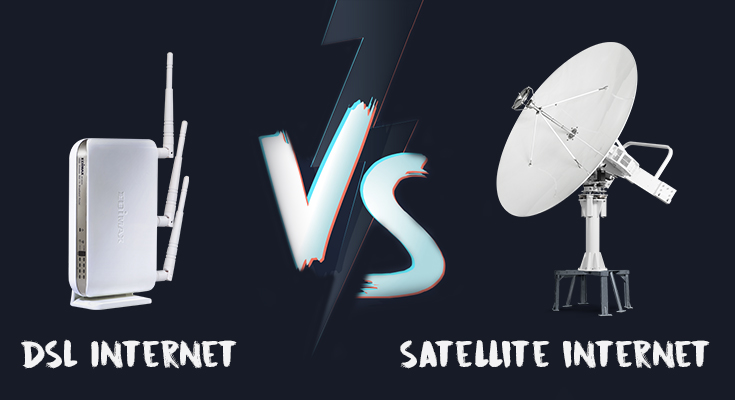 In the internet industry, HughesNet is the biggest satellite internet providers in terms of consumers. HughesNet serves over 1.2 million people throughout the USA. The reason why users prefer HughesNet over Viasat is that it offers better budget plans with no price hikes. Let’s have a look at what you’ll get with HughesNet Internet Plans.

Viasat offers better speed options than HughesNet and that’s why Viasat is more expensive. Over 7, 00, 000 use internet connectivity offered by Viasat. Viasat Internet plans tend to get more expensive with time. The biggest drawback of using Viasat as your satellite internet provider is that you’ll be vulnerable to surprise plan hikes.

Recommended  The History of Domain Names: Story of the Internet

Direct Subscriber Line is the full form of DSL. This is one of the older versions of internet technology. After the Dial-up connection, DSL was supposed to be the fastest internet connection. DSL is also one of the land-based internet connections, DSL uses phone lines to connect to the internet, don’t confuse the connection with Dial-up as you can use both the services at the same time. It is also much faster than satellite internet but the connectivity is reserved for cities and towns only!

There are a lot of DSL Internet Providers and almost all of them offer better internet speed than Satellite internet. DSL internet wins the debate of “Satellite internet vs DSL” if speed is the only factor. Almost all the major ISP in the nation has some sort of internet connectivity. If we are to choose the best DSL internet providers then the list has to comprise of AT&T and CenturyLink.

This is one of the most renowned names when it comes to internet connectivity. AT&T internet deals in only two types of connections, DSL and Fiber internet. They have only one plan for DSL internet and to be honest, the plan is a bit confusing. The name of the plan is “AT&T 5-100 MBPS”. The plan is named this way because it offers speed based on your location. Your plan may max out at 20 MBPS or may go all the way to 100 MBPS. Speed is usually varied in location. The plan costs about $50 per month and it is great for all those who don’t want to suffer from a satellite internet connection. AT&T serves a few remote locations with their DSL plan, so if you happen to live in these locations then you are lucky!

One thing that puts CenturyLink above all the other providers is the price for life Guarantee. This means you won’t have to face any price hikes as long as you use the connection.

DSL internet is a great choice for those who don’t want an internet connection that is as slow and laggy as high-speed satellite internet. The plans are often affordable and you can use as much data as you want with high data or no data caps. Although if you are looking for faster speeds then you should look for cable or Fiber internet connections. DSL internet can work as a replacement for satellite internet in some rural areas.

Difference Between DSL and Satellite Internet