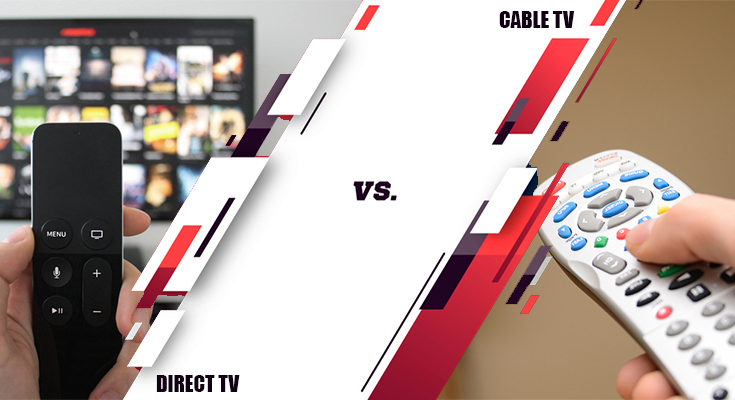 Cable TV since many years has ruled the entertainment market. Up until late 1990s the only option anyone had for a TV service was cable TV from a local provider, but no more! Now you get 400 -500 channels out of which you only watch 50 something. Its still feels good scrolling through hundreds of channels only to find nothing.

You don’t have to rely only on cable connections to get your daily dose of entertainment, TV streaming and Online TV and Satellite TV has completely changed the way we watched TV.

It all depends on you basically, whether you want to go with an old school cable connection or satellite TV connection. With Satellite TV, in this case DirecTV you generally get packages under low prices and get better resolution as well. If you have Local provider and a provider that offers DirecTV services then you may go with either one due to various factors.

The common myth about Satellite TV connections is that your local TV provider doesn’t deals in satellite TV. Well that is absolutely false, Cable TV is also depended on Satellite connections. The only major difference between DirecTV and you Local Cable  TV that in DirecTV the dish will be mounted on your roof, and in Cable TV the dish will be mounted atop of you Cable provider’s roof! Both the connection receive signals from the orbit and there’s no major difference.

Are there Different channels and packages

With local Cable TV providers you get existing packages, you can choose the package they have already available. In simple words there’s not much choice,Let’s assume you chose a basic package in which you get 70 channels. Its the only package that fits in your budget and you don’t like half of the channels. To add more channels you have to pay much much more! In DirecTV you get a choice to choose the channels you like to watch.

As for the pricing. The factors that determine the pricing are the features and no. Of channels you are getting. DirecTV has plans starting from as low as $29.99/month. As stated earlier DirecTV usually has lower costs than Cable TV. The cost of Cable TV plans depend on the provider you have and the cable company in your neighborhood. So yeah if you have expensive plans in your area that means your local cable company puts m0ney over customer satisfaction.

This is the most important factor of this comparison. Whereas customer service satisfaction depends on every particular person. But the one factor that puts one service above another is “How soon the query/complication solved?” in the last 20 years DirecTV has earned quite a name for itself so I guess its a sign that you can trust the brand.

While comparing DirecTV & Cable TV, its really hard to choose a winner as both the services offer almost everything same! Both rely on Satellite Network and there’s not much difference in the picture quality. But after looking at the pricing options, customized Internet Packages and customer service we have to say that DirecTV is the better option among the two!

Recommended  Teaser For Season 4 Of Stranger Things Has Dropped, Here’s All You Need To Know!

10 Comments on “DirecTV Vs. Cable TV: Which One Is The Best”