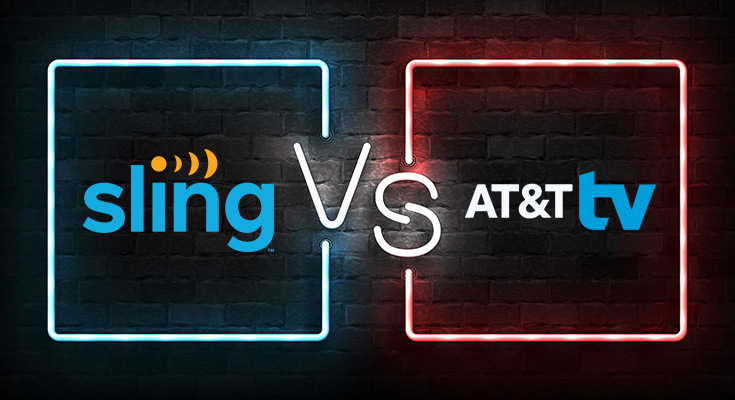 Sling TV vs AT&T TV is a debate people have been going through for years. Both the streaming platforms come with their own set of pros and cons. Sling TV vs AT&T Now is something that you need to focus to make sure that you get just the right channels. Both of the services are awesome in their own way but Sling TV has lower prices. That’s the first thing everyone needs to think about while searching for a live TV streaming service. AT&T TV Now’s prices are a bit on the higher end of things but it still is one of the most preferred services. Sling TV is cheaper but the channel lineup is extremely confusing.

Which is better Sling TV or AT&T TV Now? Before we reach a conclusion about this problem, you need to make sure you all about the pros and cons of both streaming platforms. Here are the main benefits and disadvantages of both services.

Obviously, you can’t decide on any particular service that doesn’t offer promotions. Promotions are the best part of choosing any live TV streaming service. That’s the sole reason we have hunted down some delicious deals and promotions for you and your family. Here are the promotional deals for both Sling TV & AT&T TV Now.

Sling TV vs AT&T Now, which one is better you ask? Well, there is a lot of differences between the services. To find just the right service between Sling TV vs AT&T TV Now. Let’s focus on all the differences so you can understand what you actually need from your preferred live TV streaming service.

On one side, you have Sling TV that comes at an affordable price and the best features in almost every single category. If you are budget conscious and you need limited channels then Sling TV is definitely the right choice for you.

Another side you have AT&T TV Now, which was previously known as DIRECTV Now. The key difference is that AT&T TV Now offers more channels. They offer cable-like prices. Although these factors don’t really make the services that much different from each other. To get a better understanding of everything, we will break AT&T TV now vs Sling TV feature by feature.

Make sure that you are completely focused here as the plans are going to get really confusing. Both the streaming services have really different package layouts. You need to know about the packages offered by Sling TV & AT&T TV to make an educated decision on where to invest your money.

Needless to say that Sling TV has a weird channel lineup. You can get either Sling Blue or Sling Orange for $30/mo. While the price is the same, you will get a different channel lineup in both the packages so they don’t overlap each other. This simply means that you have to choose between either Fox or ESPN. It can be extremely annoying having to choose between different types of plans that offer the same number of channels.

Although, if you don’t like choosing between the plans, then you can get the Sling Orange & Blue for $45/mo. You can get a channel line up of both the packages by just adding $15 to a plan. According to customer reviews, Sling TV’s channel line up makes customers happier than AT&T TV Now’s channel lineup. So this section of race between Sling TV channels vs AT&T Now is obviously won by Sling.

Over the course of the last few years, AT&T TV Now has changed a lot. It used to be a fan favorite but the times have changed a lot. AT&T TV Now’s biggest cons are its expensive packages. If a user wants to pay $135 for a plan then they are most likely to buy a Cable TV Package. AT&T TV now is offering lesser channels for more price than cable & Satellite TV packages.

There is one primary benefit of the service, you get HBO’s exclusive streaming service for one month for free. Not every package of AT&T TV Now fits in each other. Basically, every channel in Plus is not available in Max and the same goes for almost all the plans. So before you let go of your cable package, make sure you are aware of your channel list.

No service is perfect and this is the same for both Sling TV & AT&T TV Now. They do come with extra charges and some fees. Sling TV asks you for $5 if you want a cloud DVR feature. Although the fee is completely optional, it is not included in your package. And there aren’t any installation charges so that’s obviously a good thing.

AT&T TV Now is no too different, it also comes with additional charges like the multiple streams add on option. The price is the same as Sling TV’s cloud DVR service and it is also optional.

If you are debating between AT&T DIRECTV now vs Sling TV. Then you will have to decide which service are you willing to pay extra money for.

The thing is that AT&T TV Now has way more channels than Sling TV but it is still missing a few channels. The one channels that most AT&T TV Now consumers will miss is the NFL ticket. Sling however is missing HBO and no you can’t even get it as an Add-on. So you really want to know about the channels you are getting before signing up for any other package.

If you want basic entertainment and a few niche channels, Sling TV is mostly the best choice for you. It covers a broad base even with the most basic of packages. If you want more channels for news, sports, kids, and entertainment then you will have to sign up for Add-ons.

Recommended  Apple TV Not Working? How To Fix Your Apple TV?

However, if you are looking for a complete entertainment package then AT&T TV Now probably has all the channels you need. If you go with the AT&T TV Now Max plan, you can get HBO. We won’t recommend the expensive packages on AT&T TV Now as they are not worth their value. For the same price, you’ll get many more channels from any local cable company.

You can’t end the debate of Sling TV vs AT&T TV now without considering the specs and features they have to offer to the consumers. If you couldn’t understand which service you wish to choose from the channel lineup then maybe the difference in specs and features will make a difference.

All the live TV streaming services offer a cloud DVR Service. You can record your favorite TV shows and movies and watch them wherever and whenever.

Sling TV lacks behind in this part of the service. It offers just 50 Hrs of storage that too for $5 per month. On the other hand, AT&T TV DVR service offers you 500 hrs of cloud DVR storage. You don’t have to pay an extra amount for recording the shows, movies, and sports networks.

How many streams you get with your live TV streaming service is one of the most important factors. Having multiple streams allow you and your family to watch whatever they want without having to worry about TV conflicts.

If you go with the Sling Orange & Blue plan, then you won’t get four streams all over. You can just stream 3 simultaneous streams on Blue channels and 1 stream on Orange channels. This part really sucks in terms of Sling. AT&T on the other hand AT&T TV Now will offer you 2 simultaneous streams regardless of the package that you choose. If two won’t do you any good, then you can pay $5 extra to AT&T for an extra stream. In terms of multiple streams. AT&T TV now is the winner of Sling TV vs AT&T now.

Now let’s move onto the thing that matters the most while deciding which is better Sling TV or AT&T TV now? You should keep one thing in mind that all streaming video quality drops when your internet connection is slow. Regardless of the number of Pixels you are getting, it will drop down to nothing when you have a slow internet connection. Make sure you have enough bandwidth to handle streaming across all the devices. Keep in mind that AT&T TV Now struggles with service reliability.

If we had to choose between both the platforms, Sling TV would be our choice. It has better deals, prices, channels, and reliability. And if you have kids, then you should know it is one of the best streaming services for kids.

If you aren’t ready just yet to get rid of your cable connection then you need a brilliant cable TV package to provide you with the entertainment you need. Luckily, Club HDTV can help you find excellent cable TV packages based on your TV viewing needs. What are you waiting for then? Reach out to us today!