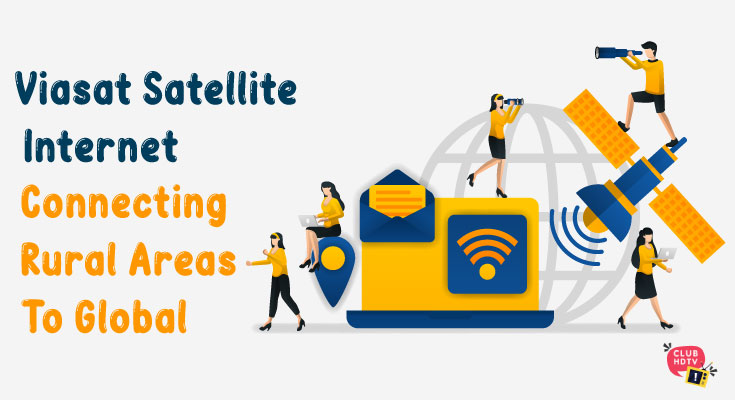 After the pandemic, there are so many people who have proved that it might be difficult to access internet service in rural areas like video calling, learning through videos, and providing education, but it is not impossible. There are a few names that have made this possible to avail internet for rural area people and people who live in remote areas, where cable companies do not provide such services.

There are low-orbiting satellites that promise you a lot but at last, the cost of it becomes a problem. However, there are a few providers that provide internet for rural areas like Viasat Satellite Internet. There are nearly 14.5 million Americans who live in areas where they do not get broadband internet access. However, the urban-rural divide is vast and by the end of the year 2019, there were 17% rural residents. According to a Federal Communication Commission (FCC) report released in January 2021, 21% of people who live on tribal lands do not have the slowest definition of high-speed internet access compared with about 1% in urban areas.

People who live in rural areas are more likely to say that getting access to the internet is difficult compared to the people who live in urban areas. Get access to Viasat Satellite Internet, and get access to the internet for rural to remote areas where you will hardly get a cable provider. However, it is time to admit that we can change this problem with new technology because there are local and federal governments that are committed to providing broadband internet service to rural communities that have been in progress for decades.

The advantages of technology also come with a cost and not everyone can afford such expenses. Also, providing a facility of optical fiber to a single rural user is not economically sound for the service providers. And, the same goes for the 5G wireless service and cellular service towers.

Why Telephone Wires, Satellites are Slower

If we talk about digital subscriber lines (DSL) that provide internet service over wired telephone lines or satellite services like Maryland-based HughesNet, and Germantown, we can say that the country is stuck with the older DSL. As per the service-comparison site BroadbandNow, the maximum speed you get from DSL service is 100 megabits per second (Mbps). The max speed a fixed DSL line provides in a rural area is 1.2 Mbps on downloads.

Recommended  Find The Best Internet Provider Near You - How?

There are various satellite internet service providers who provide 25Mbps internet speed and this can fade your expectations, especially on windy, rainy, and snowy days. Even if you want to

enjoy a standard quality video on Netflix you need at least 3Mbps of speed, which is 480p (a screen height of 480 pixels with a progressive scan. If you want to watch ultra-high-definition or a 4k video then you need at least 5Mbps of internet speed.

In the year 2025, the FCC decided to raise the official need for broadband to 25Mbps for download and for uploads, 3Mbps. Then too, this speed is 40 times slower than the gigabit download internet speed that you can get from Google Fiber, AT&T Fiber, Verizon Fios, Century Link, and Xfinity in cities. However, if you are looking for internet service for rural areas, then you can go for Viasat Satellite Internet.

This is a potential solution and going through the early testing process and in this, they use a

The constellation of thousands of satellites to provide internet services to remote areas all over the world. This is the first such service, launched by Elon Musk’s SpaceX and it is called Starlink.

This service can provide a speed up to 300Mbps in remote areas or even more, unlikely from other providers. The small satellites by Starlink, are less likely to create latency or signal delay because these satellites are 340 miles above the Earth.

SpaceX has already got approval from the FCC and their plan is to launch and operate up to 12000 internet relay satellites. As per Starlink, Starlink had 1700 satellites in orbit by the end of May.

Under the Starlink beta program, they have done testing for weeks on the northern United States and Southern Canada, which has shown improvement. Also, they have come with some alternatives that can increase the download speed to 200Mbps, 100 times faster than DSL.

Recommended  Guide for Xfinity Internet Self Installation and Activation

According to Elon Musk, SpaceX got more than a half-million pre-orders for its satellite internet service and these offers are not just from rural areas. With this technology, people would experience streaming movies without buffering, downloading videos, email in seconds, conducting zoom meetings, and video calling in remote to rural areas. You would also be able to play video games and update your computer operating system.

According to the Starlink company experts, sending more satellites aloft can improve reliability. However, the Viasat internet providers objected to the large numbers of satellites because SpaceX asked FCC to authorize 30,000 more satellites. The Carlsbad, California-based Verizon internet provider, started their services in the year 2009, they also raised a potential threat and objected that the damaged and Space debris satellites can fall on earth. However, the FCC has not made any decision on the SpaceX request.

The internet packages of Starlink are $499 for the Wi-Fi router, and satellite dish. If you include the $99 monthly service and taxes and shipping cost the entire package goes above $500 nearly $581.94. However, the other providers with slower speed can cost you more than this.

It is easier to set up the Starlink system, you just need to push the dish’s pole into a supplied tripod and then find an open piece of sky to aim at and then string the cable to the integrated Wi-Fi router and turn it on. The dish has features where it is heated to keep to protect from the ice and snow and it is automatically motorized to adjust.

If we talk about HughesNet satellite internet, the monthly price starts from $59.99 with 10 gigabytes (GB) and a month at the top speed of 25 Mbps. If you increase the limit to 50GB at the top speed, the charges rise to $149.99 a month, in this scenario the download speed is reduced. You must be thinking that is a lot of data, but it’s not, even if you watch four two-hour movies on Netflix in 4k, the 50GB limit is easily exceeded.

If we compare Startlink from HughesNet, we can say that HughesNet has a contract of two years and its modem lease costs $14.99 per month or $449.98 if you decide to purchase it outright. But, Starlink has no contract and comes with no data caps.

Recommended  Difference Between Bandwidth And Latency: All You Need To Know

Why Astronomers are worried about light pollution?

The reason behind this is that Starlink’s plan itself and not related to their competitors. Astronomers are worried that the amateur stargazers who pointed out that the light pollution from Starlink’s low orbiting satellites can reflect sunlight interfered with telescope observation.

It’s not like SpaceX didn’t look for other alternatives and solutions like VisorSat, to use a black sunshade to reduce light reflection but how effective this solution would be is still not clear.

There would be thousands of satellites that would be circling in the low earth orbit. Therefore, Starlink want to automatically maneuver its satellites to prevent any collisions and decided to not move its equipment to avoid any further problems. Starlink has made an arrangement with NASA to prevent future collisions with craft such as the International Space Station and Starlink will inform any planned launched to NASA.

In the year 2020, Amazon got permission from the FCC 2020, to launch what it calls Project Kuiper and in this project, they want to provide internet services to rural areas. In April month, Facebook understood the opportunity and therefore send a dozen members of its wireless internet team to Amazon and started their work on the Kuiper project.

China has also lined up two companies, Galaxy Space and Hongyun, to initiate their own low earth orbit in their country. Till now, what we can expect from low orbiting satellites is that they can provide high-speed internet services to some of the remote and rural areas. Therefore, even the Government agencies are looking for the solution with a pilot test of Starlink’s system planned this year in Allen Township, Ohio. The percentage of people who are working from remote areas has increased since the pandemic started and therefore the demand to fulfill the high-speed internet for rural and remote areas has also increased. Let’s see what changes you experience with these upcoming technologies.