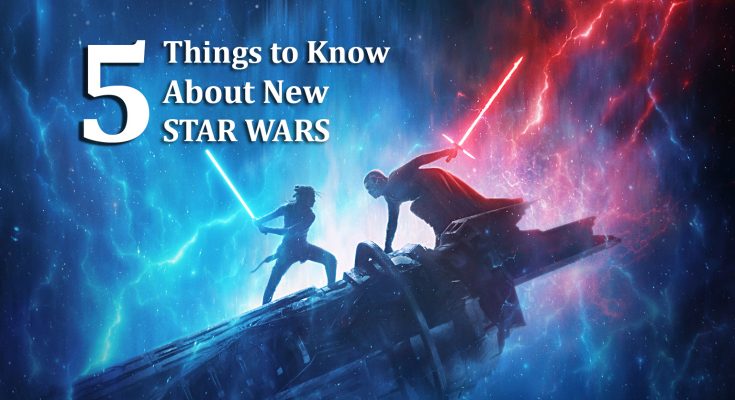 42 Years of galactic awesomeness and it all comes down to this folks! The final Star Wars trailer for the final movie in 42-Year-old Skywalker Saga is here.

With less than 2 months left for the movie to be released (In theaters on 20th Dec.) fans got to take look at the preview of what looks like a super promising movie! The cast is back playing the characters that had somewhat a shaky start.

A whole lot of things happen in the trailer and there are still several weeks left until we witness the greatness in the theater itself! Here are 5 things that stood out in the trailer!

Brace Yourself for a Massive “Star war”

The franchise has given us some glorious battles earlier as well but this one seems to top it all! In the trailer we see Millennium Falcon swoop in to lead the resistance in the battle! It will be one gigantic battle for sure!

The Emperor is Back?

The new trailer teased the return of long thought dead Emperor Palpatine from the original Star Wars trilogy! We can hear the emperor saying “Long have I waited. And now your coming together is your undoing.” Seems like Emperor Palpatine has had a plan all along

Although the0y have squared off multiple times but this time the stakes seem to be higher than ever! Will it be the last time Rey & Kylo Ren face off or will Rey turn Kylo back to the good side of the force? We can only wait and watch!

C-3PO Are you Alright Buddy?

One scene that’s definitely going to leave all the old school fans emotional is watching  C-3PO probably die! We see in the Trailer a small bot working on the circuits of C-3PO for what seems to be keeping him awake! “Taking one last look, sir. At my friends” is the only line of C-3PO in the trailer.

The Force is Strong with This One!

In the trailer, we see the whole team aboard the Millennium Falcon, and all seem to be happy! This could be an indication that the movie will end on a good note and the fans will bid goodbye to the saga pleasantly! We see a final shot with Rey holding a Lightsaber in her hands and Luke saying “The force be with you” and Leia adding, “Always.”

240 Comments on “Star Wars: Rise of the Skywalker – 5 Things to Notice in New Star Wars Trailer”