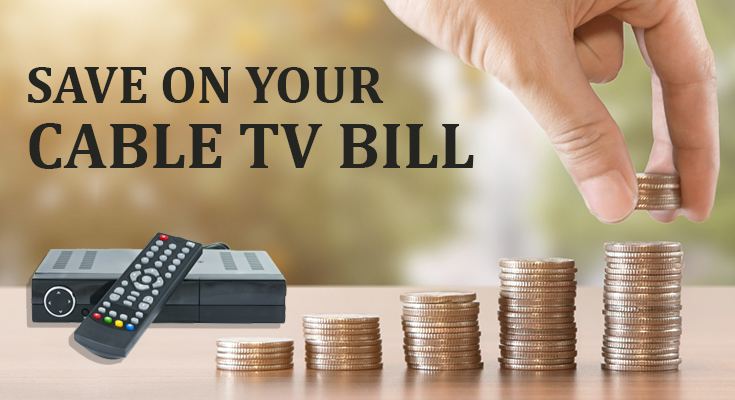 Most of us spend so much on cable bills, and that’s how the trend of cord cutting was born! But for those who are heavily relied on cable and satellite TV there’s no option other than watch Cable TV. Today we’ll be telling you to partially get out of the vicious circle of cable TV bills. You may be just a sports fan or just someone who loves to watch old movies and you are stuck paying for the channels that you don’t even watch! Take the expert tour on how to reduce your cable/ Satellite TV bill.

Get Rid Of Extras

There are so many things you don’t need in a cable TV package. You can easily reduce you satellite TV bill by dumping the extras. Extra movie channels or DVR boxes, see if you need em, If you don’t, dump them. Are you paying for extra TVs at your home? You should be using a Indoor antenna instead! Do you own a landline package with you Cable TV? you might have got it under a Bundle Plan, that might have felt like a good idea at the time, But ask yourself Do you really need it? In the times of texts do you really need a landline? If no, then stop paying extra for it!

Some cable companies charge you shit load of money as renting fee of the Cable TV Box, remote control and Internet modem. Take a look at your cable TV bill and eliminate all the rental fees. If you need the extra stuff (Apart from box and remote obviously) then you should purchase it rather than renting it every month! You can purchase a regular cable TV box anywhere and it’ll cost less than 6 months of rental fees!

Recommended  Is Your Internet Provider Good Enough For You?

Say no to Additional TV’s Payment.

Cable & Satellite companies charge you a lot of money if you wanna use more than one TV on one Cable TV connection. Now most of the providers offer internet based streaming services that broadcast the same channels you get with you cable TV connection. Its better that you get a streaming box and use your internet package to stream content on other TVs rather than paying rentals of other Cable TV boxes and additional charges.

Promotional Deals & Offers Are Your Friend

The best way to reduce Satellite TV bills is to always be on a lookout for the promotional offer and deals. They help you save a lot of money monthly! As most of the promotional deals ask you to only pay half the amount of what you are supposed to pay! You can always witch after the promotional period.

Switch to an Internet Based Service

There are a lot of internet based TV services, like Hulu or Sling TV. You can always subscribe to them. The best part is some of them are even offering custom made plans for Cable TV. Watch whatever channels you wish to watch.

Well you can do one more thing, apply all the tricks mentioned above and look at the competitors. They might be offering a better plan than you are getting right now! Or even better you can visit Club HDTV and compare all the providers and plans at one place!

5 Comments on “How Can I Save Money On My Cable Bill?”