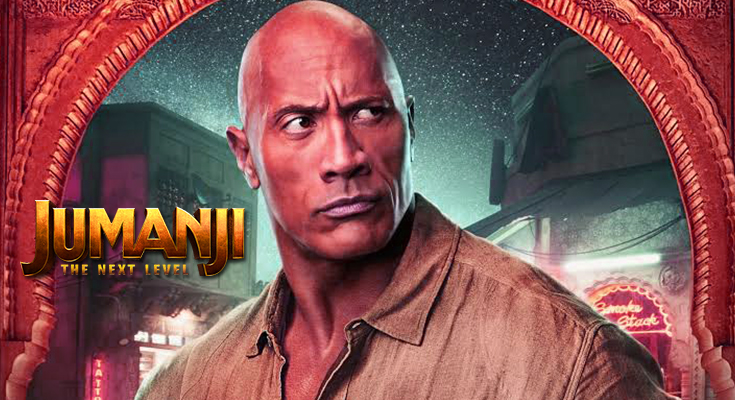 Jumanji, a movie loved by both kids and adults alike, is ready to release its third instalment. The classic Jumanji Starring Robin Williams and the 2017 one starring Dwayne “The Rock” Johnson were both huge successes. Now the Third part “Jumanji: The Next Level” is just a month away from its release.

While ordinary people like us won’t get to see it till Mid December, Dwayne Johnson has already watched the movie and is soooper excited for the release.

Here’s What Dwayne Johnson Had To Say

After watching the movie alone in a theatre Dwayne Johnson took it to Instagram, He posted the photo of Jumanji’s poster with a caption that clearly showed how excited he was for the release and how awesome the movie is. It won’t be very long till us common folks will get to see the result of Johnson’s hard work with the rest of the cast & crew!

Jumanji: Welcome To The Jungle didn’t just earn appreciation; it was a huge box office success as well. The movie collected a little over $960 million worldwide.

Dwayne Johnson and many other actors are reprising their roles as the jungle characters for Jumanji: The Next Level. All four actors, including, Jack Black, Karen Gillian & Kevin Hart, will appear as game avatars in the movie. But as seen in the trailers, all of these actors will be playing different characters from the last film.

Karen Gillian’s avatar Ruby Roundhouse, will not be same as before. Still,  different actors will be playing all of the main Jumanji avatars, which will be fun to watch. Danny Devito is in the movie as Eddie Gilpin, Grandfather of Spencer Gilpin, who has gone missing at the start of the film. Spencer would be occupying the character of Seaplane McDonough, earlier played by Nick Jonas.

What’s The Release Got In-Store?

Jumanji: The Next Level will hit the big screens on December 13th, so book your tickets now if you want to catch the first show of the movie. According to the production team, the film will earn $66-78 million during the domestic opening as it won’t be facing any massive competition like the last time.

For more updates on Jumanji: The Next Level, keep checking back to ClubHDTV.

3 Comments on “The Rock Is Hyped For The Release, Jumanji: The Next Level”