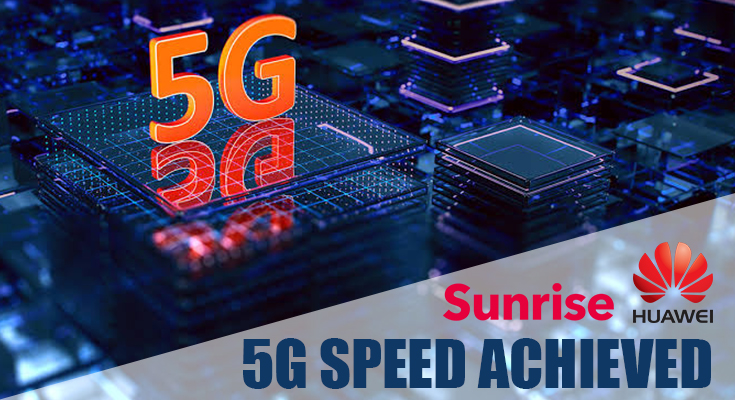 Sunrise and Huawei have set a new world record for attaining a maximum 5g speed of 3.76Gbps. They attained the speed by using a 5g enabled smartphone. They achieved this speed during a test on a powerful C band 100Mhz which is compatible with 3GPP standards.

Earlier, a Single User Smartphone Speed Was Recorded Up To 2gbps.

Sunrise Telecom is the first-ever telecommunication service in Europe to have achieved this level of speed, which is an admirable feat on its own! Thanks to the Chinese Tech giant, the Swiss-based telecom firm is now providing 5g network across 262 Swiss Villages & Cities, that can now access incredible speeds and all sort of benefits that come alongside it. Broadband internet, Interactive Gaming & HD-TV are now easily accessible to those who never dreamt of it.

How Huawei Achieved This Admirable Feat

This will help carriers empower more businesses and operations across industries, transforming them digitally. During this summit company also revealed that the world’s first 5G core network is based on Micro service-Centric architecture which supports many networks including, 2G/ 3G/ 4G/ 5G NSA/ 5G SA.

What’s The Competition in the 5G Race

It’s obvious that Huawei isn’t the only one in the 5G race. Many other Telecom giants are also trying to get into the high-speed 5G Universe. In June, “Three UK” announced that it would launch the country’s fastest 5G throughout 25 cities later in the year. Three got 1.40MHZ of 5G spectrum, which was they claimed, will deliver the fastest speed till now to its customers. As for who’s the closest competitor of Huawei in this race, that would be Vodafone. The telecom company announced that 50MHz of 5G spectrum as achieved.

Recommended  Does Google Keep an Eye on me? What Google Know About Me?

What’s your take on 5G

These are the times for lightning-fast internet services. Would you shift to a faster and most probably costlier 5G Internet connection when it’s available? Or will you stay loyal to your current internet service? For us, time will reveal all the secrets.