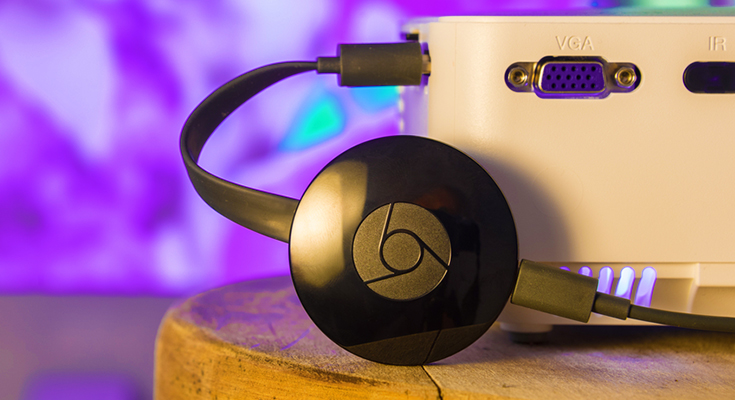 Google Chromecast is a simple plug and play streaming device. To make it work you just have to plug it into your TV’s HDMI port and you are all set to stream whatever you wish to watch. You also get a second plug for power. Setting up your Google Chromecast device is very easy. Let’s go in a detailed Google Chromecast Review for better understanding.

The word Chromecast is a clever play at streaming services. The word “Cast” means streaming content wirelessly from your phone, laptop to your TV. There is no interface or remote because Chromecast simply mirrors anything that is playing on your device.

Technically speaking Google Chromecast is nothing but a glorified dongle. It is similar to devices like “Roku stick” or “Amazon Fire Stick”.

Google Chromecast is basically the size of a cookie connected via a flat HDMI five-inch HDMI cable and plug. When you plug it into your TV it is hardly noticeable. It also comes in different colors. If you are clumsy and often lose stuff then we would suggest you buy a white colored model.

Google Chromecast: What Makes It Different?

Amazon TV Fire Stick and Roku Stick are two main competitors of Google Chromecast. All of them come under the same price list. If you wish to spend more bucks then you can buy the 4K version of all the streaming sticks.

The table compares the standard versions of all the streaming stick models. In this price range, Amazon Fire Stick and Roku Stick is a better option than Google Chromecast. With these streaming models, you’ll have a more stable streaming experience,the price is almost the same and you’ll also get a remote with it.

Setting Up Your Google Chromecast

While its relatively easy to set up Google Chromecast. It is still different than just plugging in your Set-Top Box. There are only three steps in the installation process.

1. Download the Google Home app to your phone or tablet and plug the device into your HDMI port

2. Open the Google Home app and go the devices option.

3. Tap setup for your Chromecast and follow the commands to complete the setup.

From there, you’ll be directed to additional features like renaming your Chromecast device. Keep in mind that your Google Chromecast won’t function with another browser. If you are a Mozilla user then you’d have to use chrome for better usability.

The best thing is that Google Chromecast is compatible with any TV that has an HDMI port. And a USB port to power it. If your TV doesn’t have an HDMI port then you can also use a USB – HDMI converter.

Recommended  Is My TV Spying On Me? Can My Smart TV Be Hacked?

Google Chromecast was launched in 2015 and it has come a long way since then. It is still the most affordable way to become a “Cord-Cutter”. The device is simple and easy to set up. But you still get better options at the same price such as Amazon Fire Stick. However, if you are looking for a cheap and fast service then Chromecast is the best thing for you. One thing to remember is that you’ll need a high-speed internet connection for any of these devices to work.