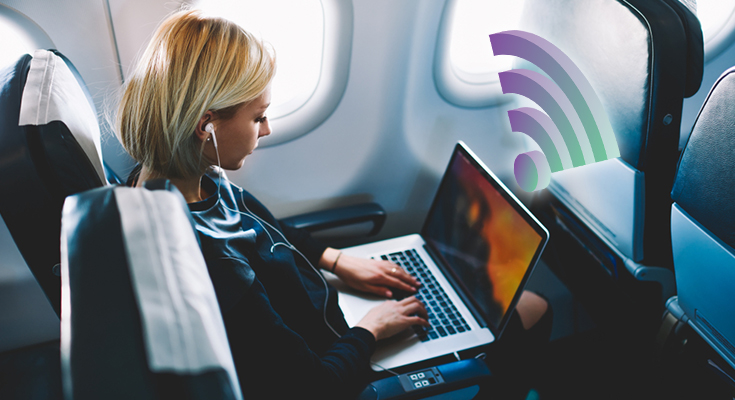 If you are a frequent flier then you must know how much time we waste on flights sitting idle. Imagine how many hours of productivity you can add in your life if you had in-flight internet service. They introduced the concept in 2017 and since then people have been trying to make most of it. You can squeeze in some work during your flight or finally catch up to that one movie that you have been longing to watch. To accomplish this goal you need to choose the best In-Fight WiFi internet service.

As of right now, there are two leading providers of In-Flight broadband internet service and all sorts of connectivity in commercial and business aircraft. GoGo and Viasat is the fastest airline Wi-Fi service provider. GoGo is headquartered in Chicago, Illinois and it has 51 percent market share in North America and has contracts with 17 commercial airlines. It uses a wide range of technology, including a cellular network and satellites to offer max speed of 70 MBPS and download speed of 12 MBPS.

Viasat joined the market of In-Flight broadband internet service last year. It covers commercial and military flights with its secure networking services. Viasat has caused a 16% decrease in GoGo’s stocks after it acquired a contract to equip America’s Airlines of Boeing 737 Max with a satellite internet connection. Viasat has one satellite in orbit and is planning to launch two new satellites shortly which will result in a significant increase of download and upload speeds.

Recommended  How The Weather Affects Your Internet Connectivity?

We have compiled a list of airlines that offer the best in-flight Wi-Fi internet access. We have based our list on customer reviews, price, and available payment options.

JetBlue became the center of attention this year when it announced to provide free wireless internet service on all flights. Their service has a very unique name called Fly-Fi, and passengers are allowed to use it in any way they want from the moment they step onto the plane to the time it touches down. The only limitation is that the service is currently available over U.S.A

JetBlue has also partnered with Amazon to give you the amazing Amazon experience, including the streaming services and music services. To elevate the experience, even more, JetBlue is also giving TrueBlue points for every $1 spent shopping on Amazon, you can redeem these points for JetBlue flights or you can donate them to a charity or to any other great cause.

Virgin America is the second airline in our list to offer the best international flight Wi-Fi. It now has offered wireless internet services to the whole fleet. That means whatever flight you choose, you will get in-flight broadband internet service. Their a320 aircraft uses Viasat satellite internet for the best in-flight Wi-Fi service. It offers speeds that are 8-9 times faster in comparison to other in-flight wireless internet access. The rest of the aircraft uses GoGo Wi-Fi service, that offers good speeds but not fast like Viasat.

Unlike JetBlue, you will be charged for in-flight internet access. The fees start from as low as $5 and goes all the way up to $40. We also know that in some flights the internet service isn’t even available for the whole duration of the flight. So, make sure you know what you are paying for. Don’t shy away from asking for information whenever you pay for the best in-flight Wi-Fi service.

The last name on our list is Delta Airlines. Delta Airlines uses GoGO’s 2KU satellite internet service that offers internet speed of up to 100 MBPS per plane. To clarify things for non-technical folks, 30 people can stream Netflix at the same time without facing any buffering or drop in quality.

To use Delta Airline Wi-Fi, passengers must purchase a “Delta Wi-Fi pass” and have to pay $19 to access the internet for an hour and $40 for the duration of the whole flight. The only site you can access absolutely free of cost is Delta Airline’s in-flight wireless portal.

Airlines To Stay Away From

If you need internet access during the whole time you are on-board then there are airlines you should stay away from as you won’t find the best in-flight Wi-Fi service in all airlines.